skip to main | skip to sidebar

Andrew is best known for his figuratively and literally dark images of the industrial landscape and its antique vestiges. At first glance, his new show ‘Cell’ at Christine Abrahams Gallery is a departure, but despite appearances these new pictures are recognisably the products (emissions?) of the same hand.

They recall Andrew’s earliest works, of industrial hulks and ageing bits of machine effluvia shot at night with long exposures, caressed by a soft hand-held light source that gave many of them an unearthly glow, collapsing notions of scale or context in the process and energising them with life. These new pictures have that same sense of discreet action illuminated by pools of hot light, a palette of primary colour against blackness.

Young women out on the town, in their natural habitat, stare longingly into the screens of their little electronic avatars, while they are watched, apparently without unease but without the slightest sense of obligation, by us, the impotent observer. 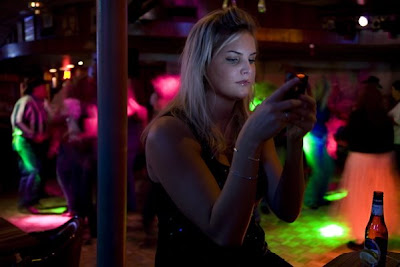 ‘Katie’ reminds me in a strange way of Toulouse-Lautrec’s ‘At The Moulin-Rouge’. They have a similar wide view of a nightclub scene and they evoke the same lonely disconnection that can come upon us in a crowded night club, a feeling of desolation, that I could only ever be a voyeur in such a space, a watcher and never a participant. 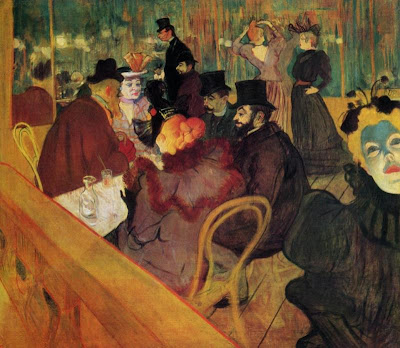 There is no mistaking these for the work of a woman, or not a heterosexual woman at any rate. These young women are palpably desired. There is no equivocating about the ‘male gaze’ here, they unapologetically embody it. But the smiles that play about these glossy mouths are not for the middle-aged bloke behind the camera, no matter how cool he might think himself to be (and Andrew is very cool). That boat has sailed, as it does for all of us, even if the most we ever did was gaze longingly from the pier. Desire, such as it might be, is for the love object on the other end of the text message, or for the device itself.

Greg Neville observed that the experience in the gallery was "like looking at tropical fish in an aquarium", a perfect analogy. It captures the exotic nature of its subjects to the observer, but more importantly the sense that we are somehow separated from the world we observe, like gapers on one side of a sheet of glass.

I have a feeling that the subtext of specifically masculine desire might be a problem for some; I have already heard some critical voices along these lines. However, the pictures themselves are more subtle than such dismissal often allows. Several of them hint that the relationship between observer and observed is more ambiguous than a casual glance might suggest. Sometimes the picture contains other silent watchers within the frame, a blurred hand of indeterminate gender holding a lit cigarette, a shadowy profile in the foreground, one photo taken from the car's passenger seat looking back at a woman in the back, implying the presence of at least three people. The expressions of the women themselves are ambivalent about the presence of an observer, and I suspect there are many potential readings of those expressions possible.

I love the ambiguity of the word ‘Cell’. It is most obviously the name for the object of desire itself, the cell-phone. But it is also a prison cell – of the single consciousness, at a remove from all that might be going on around it while that thin line is still connected.

A single frame of cinema film is also called a ‘cell’, and these images are certainly cinematic, in that they each have a highly constructed mise-en-scene complete with character actors and background extras. A single frame of cine-film is only a one-twenty fourth section of an unfolding event but these pictures are in another category. They are complete in their stillness, there is no sense that anything significant has proceeded either before or after the action.

My only criticism is that the presentation doesn’t really add anything that is not already there in the images on the gallery website. The hanging is a bit crowded and unnecessarily traditional with big prints under glass. Such furtive, nocturnal subject matter could have done with low lighting, on darkly painted walls.

Nice reading, Sean. I started thinking of Prufrock while looking at these photographs ("I do not think that they will sing to me").

Any thoughts about whether these scenes are found or composed? (I saw a documentary about Shelby Lee Adams recently, so that kind of question is on my mind.)

Hi Michael - yes, Prufrock definitely, though I'm not sure Andrew would recognise the comparison!

The pictures are arranged rather than 'found'. The exposures and technical requirements of making images like this would preclude 'from the hip' shooting, not to mention the attentions of nightclub bouncers.